Developers are a vital living force in the development process of every public chain.

As if Ethereum, from 2015 to now, has held five developer conferences DevCon for developers, where MetaMask, Uniswap, ENS, and other leaders of the Ethereum ecology were discovered, and Ethereum thus sits as the world’s No.1 crypto developer community.

This proves that paving the way for developers is a must for public chains and will thus be the key to influencing future ecological development.

The first permissionless public chain in the Move language

On July 1, 2021, the proposal was successfully implemented in the Starcoin mainunet, and the Starcoin ecosystem was officially fully opened, becoming a permissionless and Turing-complete smart contract platform. The first Starcoin Move online hackathon competition will also be held when the proposal voting in progress. This is the home ground for ecological development. The match lasted for five weeks. With the preliminaries and finals of the hackathon coming to an end, the application ecology of Starcoin has begun to take shape. MVP in Starcoin Hackathon

In this StarcoinMove online hackathon competition, participating teams need to build DApps based on the Move contract on the Starcoin chain. The development directions of the officially recommended developers include Yield farming, DEX, Asset-Management, Lending, NFT, Oracle, Cross-Chain, Algorithmic- Stablecoin, and other business directions.

Among the nearly 30 teams that signed up for the competition, 24 teams finally won the award after scoring the code complexity, project completion, creativity, practicality, display, influence, technical difficulty, design, and other factors of the participating projects. The participating teams released 15 different business MVPs (minimum feasible products), reflecting the full features of the Move contract and the flexibility of the Starcoin chain.

In the end, after the selection of professional judges, 4 teams won the final. It will receive comprehensive resource support from the Starcoin ecosystem. 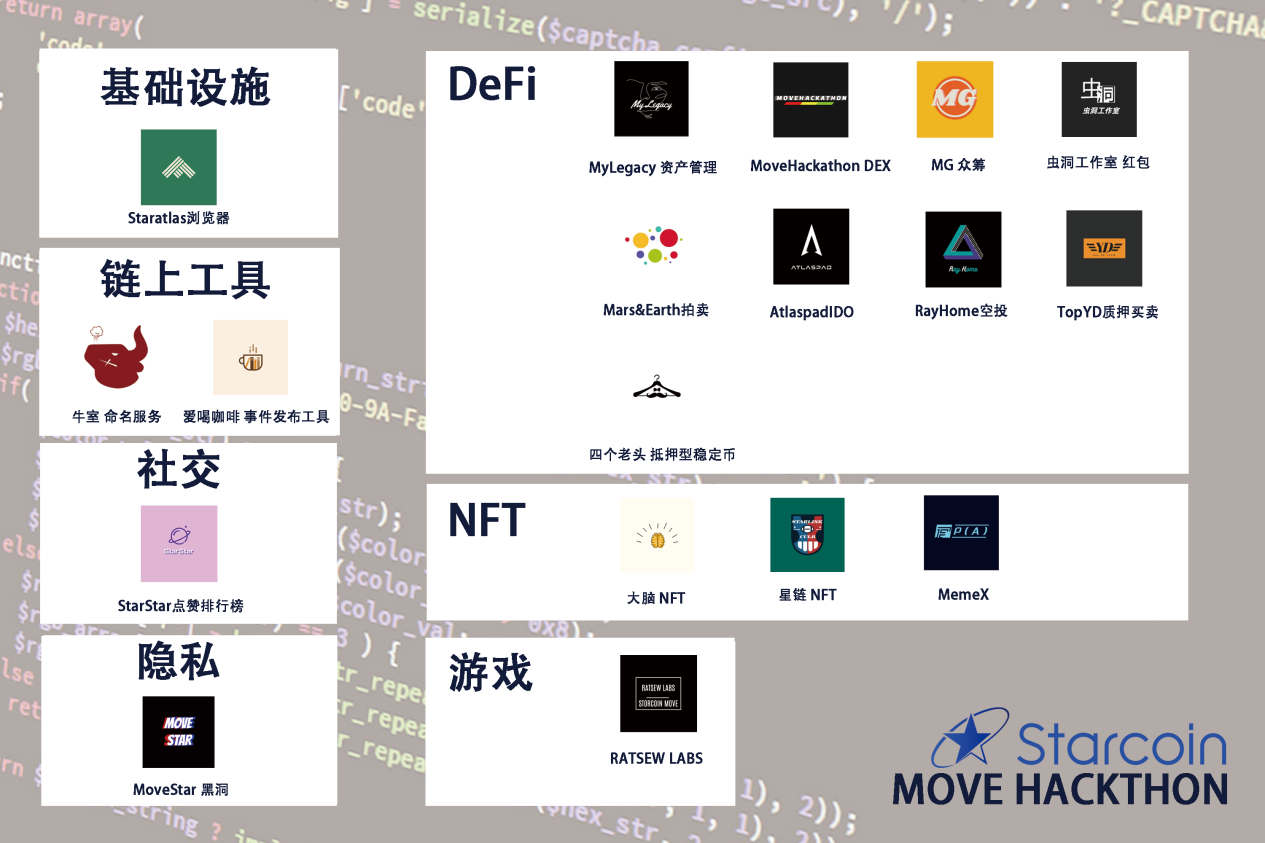 MyLegacy is committed to solving the intergenerational inheritance of wealth and property rights and reconstructing the trust system of wealth and property rights inheritance in the digital age. The blockchain contract built on the Starcoin public chain provides an open and transparent solution for the legacy of property, realizes the safe storage of assets, unlocks them in batches, and entrusts the inheritance to the beneficiaries.

Atlaspad is a crowdfunding protocol to raise funds and build community projects in a decentralized, permissionless, and interoperable environment based on the Starcoin network.

P(A) #1–#100 refers to a collection of 100 randomly generated images, each of which will be released as a separate NFT. Unlike most individual artists or galleries who use the NFT market as a way to trade artworks online, the P(A) project is actually “art on the blockchain”; using TokenID as a record of the unique identifier on the chain in the contract Deploy the algorithm associated with TokenID to generate artwork. Give full play to the advantages of Move-in NFT, and build a safe and reliable NFT.

Red envelopes are commonly used tools in life. They are published on the Starcoin chain, providing a red envelope function for everyone to fight for luck on the chain. Wormhole Studio defines a secure asset SHIBA through the Move smart contract and designs interesting red envelope logic for SHIBA.

What does Starcoin prepare for developers?

Starcoin is a blockchain project designed for distributed finance with a layered structure as an innovative architecture. It creates mining machines and builds a mining business ecosystem to maintain the stability of the underlying network. Secondly, on layer1, improving the block propagation method in the traditional PoW consensus can dynamically adjust the network block generation time, maximize network bandwidth utilization, and enhance network transaction processing capacity. Finally, in layer 2 (in the future), various expansion ideas will be used to achieve other expansions required by the business.

In addition to the design of the layered framework, Starcoin also uses the smart contract language Move as the programming language. Using the features of the Move language for digital assets, it serves developers to build digital asset-related businesses.

Furthermore, Starcoin also changed the contract account ownership design and state storage design of Ethereum and made corresponding adjustments to the crux of its original technology in the business to facilitate developers to develop applications for business logic.

In addition to the basic design of Starcoin on the public chain, the educational content prepared for developers is the more significant advantage of Starcoin.

The Move language used by Starcoin is a smart contract language tailored for digital assets. It has many advantages, such as easy-to-learn, flexible syntax, linear logic of language features, and the distinction between information and resources during programming. The important thing is that formal proofs can be performed to demonstrate the system’s reliability mathematically, so it is a language more suitable for application to digital assets.

However, due to the slow development of the Libra project, the audience of the Move language is not large, and the developers' understanding of Move is not perfect. To give full play to the advantages of Move, the Starcoin team has completed detailed essential education content for the Move language.

At present, the main network of Starcoin is running layer1, which is consistent with the Ethereum and Bitcoin networks. It is enough to undertake the business needs of issuing assets in the network and asset transfer and exchange.

It also means that developers need to issue assets based on the chain and build a business platform for asset circulation and trading. For example, on Ethereum, Uniswap is the leader of transactions. According to the open-source code of Uniswap, there are also multiple Swap platforms on Ethereum.

On Starcoin, a DEX with the same functions as Unisawp can be built. For example, in the forum, its Demo application is named Starswap. According to this logic. The projects we see on Ethereum that belong to the strong demand of financial business are all necessities of Starcoin and even explosive products in the future.

Therefore, we can speculate on the following development directions and example projects and hope that developers will participate in developing related applications.

Every application operating on the chain is an opportunity for the ecological explosion of the public chain because, in the cryptocurrency ecology, the application ecology is directly related to the value of the token economy. For example, AAVE on Ethereum has a lock-up value of more than 1 billion US dollars, contributing to an essential link in the circulation of assets on the chain. When AAVE is deployed in other ecosystems, it dramatically increases the value capacity of different chain ecosystems.

For another example, on Bitcoin, its payment network Lightning Network guides 2,500 Bitcoins into the Lightning Network for circulation through the construction of state channels, which is a disguised lock-up of the Bitcoin network.

For those DeFi and GameFi, and NFT trading platforms operating in the Farming mode, the mode is enough to attract users and lead to the possibility of solid purchase of the underlying assets on the chain. It is also a meaningful way to increase the total ecological value combined with other factors.